Many years ago, "Pho" (is known as Noodles Beef Soup) originally arrived in Hanoi and Nam Dinh. Until the late 18th century, the increased French demand for Vietnamese meat resulted in a significant volume of cow bones.

In Vietnam, bones are used to make philosophical soup, which has become a popular breakfast food.
This is a well-known meal that draws people from all over the world to this country, and we are proud to serve it to our global friends.

Each "Pho" bowl has its own particular flavor, and each "Pho" place has its own. Coming into the country of Nha Trang, poetry tourism, many people will be surprised to appreciate the famous Nha Trang "Pho"  because it is "varied" a little from "Pho".

The dry noodles are softened in hot water rather than wet noodles in the north, but with a completely different feature. Furthermore, while having a smoother aroma, the "Pho" bowl is soft, sweet, and marked with Nha Trang beach.

You must have a hot "Pho" bowl if you get the opportunity to visit the tourism city! 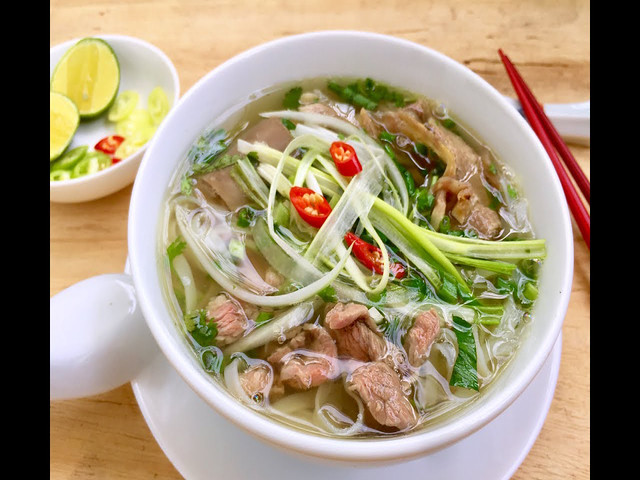 Eating "Pho" cannot be complete without cinnamon vegetables; this waitress picks up vegetables extremely cleanly; all you have to do is hurry in to eat. Condiments include soya-bean sauce, chili sauce, pepper, and fresh chilis. The waitress will bring it to you whether you ask for it or not.

Below are the top absolutely delicious Nha Trang Noodles Beef Soup stores with costs from 20.000 VND/ bowl to 60.000 VND/ bowl; have a wonderful time!