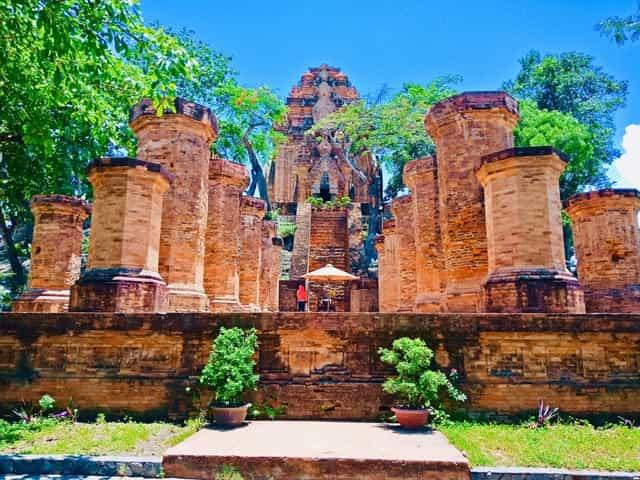 Yang Po Inu Nagar or Yang Po Ana Gar (Inu, Ana in Cham, Ede, Jarai according to the original language means Mother) (full name is Po Inu Nagar, also known as Po ANagar) is Cham Pa temple. It is located on the top of a small hill about 10-12 meters above sea level, downstream of the Cai River (Nha Trang River) in Nha Trang, about 2 km north of the city center, now in Vinh Phuoc Ward .

The name "Po Nagar Tower" is used to refer to the whole structure, but actually it is the name of the largest tower about 23 meters high. This temple was built during the Hindu (Hindu) period that flourished when Champa was in a period known as the United Kingdom, so the goddess image had the shape of Uma, the wife of Shiva.

Queen Po Ina Nagar (also known as Yang Po Nagara, Po Ana gar (ana in Cham Ede, Jrai means Mother in ancient languages) or Black Lady that Vietnamese people call Thien Y Thanh Mau Ana) is the goddess created by clouds of sky and sponges, the creator of the Earth, producing precious wood, trees and rice. She has 97 husbands, of which only Po Yan Amo is the most influential and respected person. She has 38 daughters, all of whom transformed into goddesses, including three chosen by the Chams to protect the land and still worship to this day: Po Nagar Dara - goddess Kauthara (Khanh Hoa) ); Po Rarai Anaih - goddess Panduranga (Ninh Thuan) and Po Bia Tikuk - goddess Manthit (Phan Thiet).

Legend has it that the statue of Thien Y Thanh Mau Ana followed the traditional beliefs of the Cham people without clothes. Po Nagar is now used by the Vietnamese, but has allowed the goddess to dress in a Buddhist style. This temple is also famous among visitors.

To learn more about the religious influence of this goddess, see Nguyen The An's "The Vietnamization of Po Nagar", in a series of lectures on Vietnam's past, edited by K.W. Taylor and John K. Whitmore, Southeast Asia Program, Cornell University, Ithaca, NY 1995.

The wooden tower that once worshiped Queen Jagadharma (Princess Tchou Koti or Thien Y Thanh Mau) (who ruled Linyi from 646 to 653) was rebuilt by hard materials at Aya Tră (Nha Trang). ), on a high hill next to the mouth of the Cai River (Xom Bong), to worship the goddess Bhagavati (in gold). In 774, Nam Dao troops (Java, Indonesia) raided. Po Nagar Temple, destroyed by the Austronesian forces, was later rebuilt with bricks by Satyavarman, in 784 it was completed and exists to this day, but has also been significantly damaged. Later King Harivarman I and his son Vikrantavarman III could later build 5 more towers respectively.

The earliest surviving building structures, according to Tran Ky Phuong, are mandapa ?? - it was built sometime before the inscription on beer in 817, mentioning it. Tran Ky Phuong said that the small tower in the northwest is dated to the 10th century, and the main tower dates back to the 11th century.

The remaining inscriptions at Po Nagar show the traces of a mighty nation that has existed in the past.

Row of pylons in front of the tower

The overall architecture of Po Nagar consists of 3 floors, going from bottom to top.

Lower floor: Horizontal level of the gate tower that is no longer available. From there there are stone steps leading up to the middle floor.

Middle floor: There are currently only two main columns of octagonal bricks, each side has 5 columns with a diameter of over 1 meter and a height of 3 meters. On both sides of the rows of columns are 12 smaller and lower columns, all on a brick base taller than 1 meter. Based on this structure, it is thought that this is a large roofed building, a place for pilgrims to take a break and make offerings before offering to the above temples. From this middle floor, there is another row of steeper brick steps leading to the top floor.

Top Floor: Where the towers were built, right in front of the main tower. These steps have not been used for a long time. The laterite staircase found today in the south of the larger Po Nagar tower was built in the 1960s due to increased tourism demand.

On the upper floor, there are two rows of towers surrounded by four stone walls that only remain on the west and south walls. The front row of towers has 3 buildings, and the back row has traces of 3 other towers, but now only 1, they run in parallel. The remaining four towers were built in the style of Cham towers, bricks were built very tight, did not see the adhesive. The hollow of the tower reaches the top, the door faces the east. The outer surface of the tower body has many ledges, pillars, matches. On top of the pillars, usually decorated with decorative tiles in the shape of the tower, looks like a small tower placed on a large tower. On the body of the tower, there are also many terracotta statues and reliefs, including Po Nagar, Tenexa, fairies, mammals: Deer, Golden Geese, Lions ...

The main church tower in the front row is quite large and about 23 meters high, is Po Nagar tower, which we often call her Tower. Originally the tower worshiped God Parvati, wife of Shiva. The main tower worships Po Nagar (Umar), the wife of Siva. Po Nagar Tower built 4 floors, each floor has doors, statues and stone animals, in 4 corners have 4 small towers.

Inside is a statue of the goddess (2.6 m high) carved in black marble (formerly of agarwood, and further afield of gold) sits on a solemn stone pedestal shaped like a lotus, its back like a stone slab large Bodhi leaf shaped. This is a masterpiece of Champa sculpture, a harmonious combination of circular and embossing techniques. The French took the head, now only the head is painted with cement. Scattered around the ruins there are also some human, animal statues ...

At the top of the tower is a statue of Shiva riding Nandin, and mascots such as swans, goats, elephants etc. The exterior of the tower wall is decorated with stone sculptures such as dancers, rowers, rice millers or hunters with bows and arrows. The main door in the east leads into a foyer, on both sides of the door there are two stone pillars engraved on the tradition, supporting a contoured slab with Durga goddess dancing between the two musicians. Inside the tower is dark and cold. At the end of the tower is a stone altar under the statue of Mrs. Po Nagar with ten arms. 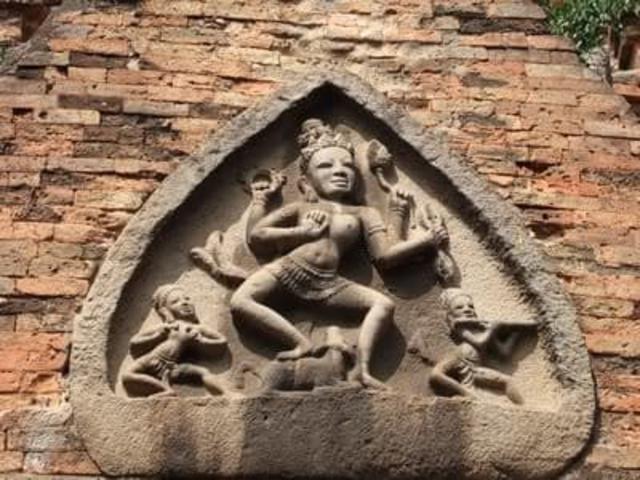 The lower hands are on the knees, the other hands are holding things like short swords, arrows, maces and javelins on the right and bells, plates, bows and horns and on the left.

The other towers worship: the god Siva (one of the three supreme deities of Hinduism), the god Sanhaka, the god Ganeca (legend is the son of the god Siva). Next to the main tower about 20 meters to the south is another small tower with less sculptural decorations, about 12 meters high, possibly the worship tower of Shiva. The way the tower is also to the south is an even smaller tower.

Inside the tower there is no altar but only a linga (pillar), and this is the temple of Ganesa, the body of an elephant head, the son of Shiva. Many authors believe that linga is a penis shaped symbol of Shiva, based on Western interpretations that are slightly sexual. 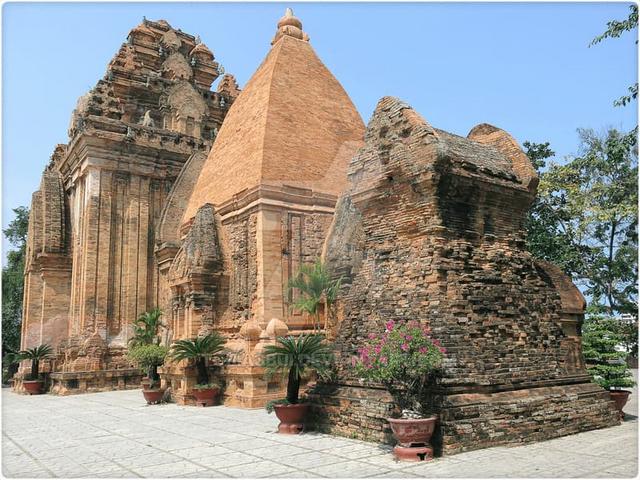 In fact, the linga represents a low stone pillar with three different parts representing the three spirits: the lower part is the square representing Brahma, the middle part of the octagon represents Vishnu, and the top of the circle of the image for Rudra (aka Shiva). So called "Cylindrical Spirit" is more appropriate.

In the rear tower is a tower, relatively least damaged in the north, with a long saddle-shaped roof. This type of roof only started in the towers of Do Ban - Vijaya (nowadays is Binh Dinh) after the capital was moved from My Son and Tra Kieu in the 11th century. On the wall there are sculptures such as the god Garuda, lion, nymph Apsara, snake god Naga. It was in the background of this tower during remodeling in the early twentieth century that the French colonists discovered and took away a hidden treasure of gold and silver offerings.

Today, two other towers in the southwest, the west, have been destroyed. This distribution makes it an interesting comparison with the brick towers at Lolei, near Angkor Wat in Cambodia, which was built in the 8th century.

Cham tower group was built and renovated over many periods from the seventh to the 12th centuries. Thap Ba may be built by the King of the United Kingdom, Harivarman I, around 813-817. Experiencing the sunshine of time, the tower was damaged. During the French colonial period, Uncle Ho's Far East organized a remodeling: using bricks to rebuild many parts and putting some statues on the body of the tower. During the war, many artifacts were stolen. 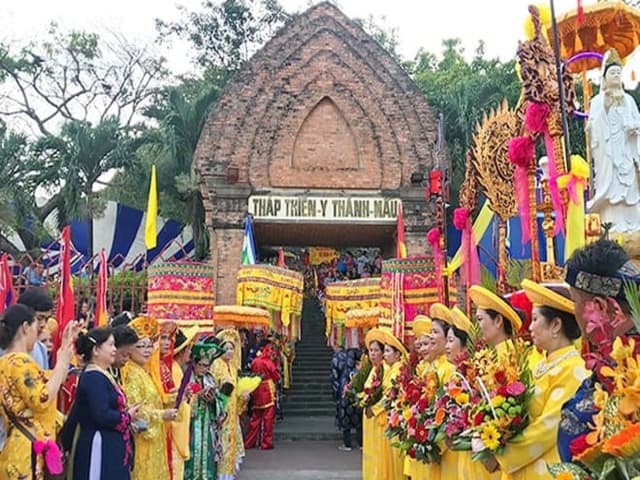