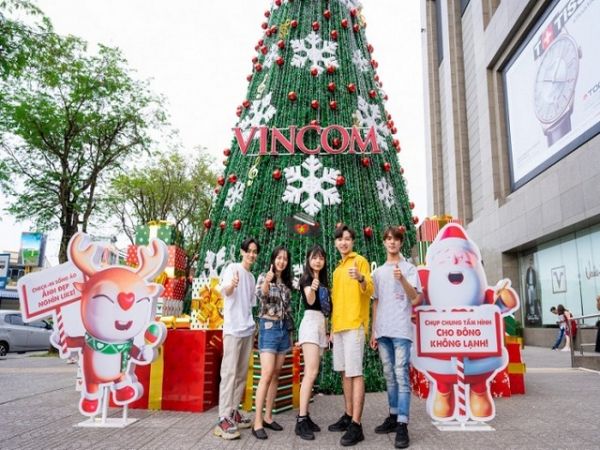 Nha Trang City enjoys a peaceful Christmas due to Covid 19. The outbreak has softened the Christmas joy in Nha Trang City once again, with health concerns, grief, and loss still vivid in people's minds. As the holiday season approaches, the city's major attractions, including shopping malls, cathedrals, and pedestrian walkways, see fewer visitors and a less joyful atmosphere.

The opulent retail center Vincom Plaza, with its decorated LotteMart, regretfully attracts just a few people, a small number compared to the photographers and souvenir street merchants who operate there.

With the temperature dropping, this month signals the start of Nha Trang's short winter. Furthermore, Nha Trang's rainy season finishes this month, and the dry season begins in January and lasts until August the following year.

December, like January, is one of Nha Trang's milder months, with temperatures ranging from 22 to 26 degrees Celsius like in Da Lat in the summer. The penultimate month of the rainy season similarly saw a dramatic drop in rainfall, with only 122.1mm falling short of the previous month's total. When leaving home, remember to pack an umbrella and raincoat, and when going out late at night, wear a light scarf and a long-sleeved shirt.

Nha Trang is a tropical paradise with the nicest beaches in Vietnam and plenty of sunshine. It would be an excellent choice for a peaceful Christmas vacation. Thousands of people will converge at 2-4 Square on Christmas Eve to enjoy the vibrant music program. You may join the spectacle by walking around the area or visiting the Tram Huong Tower (Agarwood Tower), which is a symbol of Nha Trang.