The majority of Nha Trang's attractions are historical tours and island hopping excursions. Aside from that, Nha Trang is a well-known city for its native cuisine, with numerous unique dishes for both domestic and international visitors. Among the many different forms of street cuisine. We have carefully chosen to emphasize items that are clean, reasonably priced, attractive, and delicious. Hopefully, you all have a good time and are pleased while in Nha Trang. 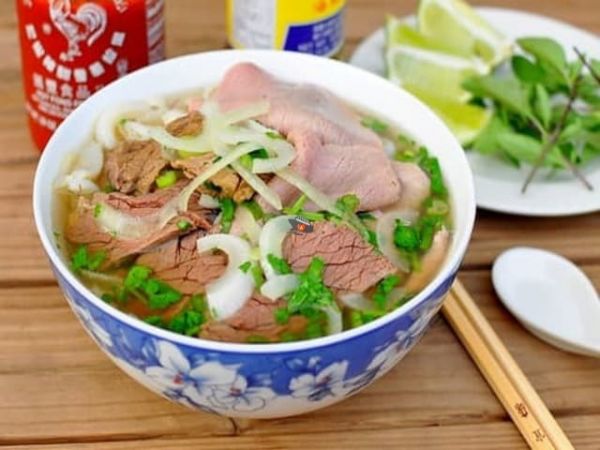 Pho is a traditional Vietnamese dish that may also be regarded as one of the characteristic meals of Vietnamese cuisine. The primary components of pho are pho noodles and broth (or broth as it is known in the South) with thinly sliced meat or chicken. There are other seasonings such as soy sauce, pepper, lemon, fish sauce, chili, and others. These spices are added to each user's preference. Pho is often consumed at breakfast or at night, although in urban areas, it is consumed all day.

Many provinces in southern Vietnam and some other regions of pho are presented with a plate of herbs such as onion, bean sprouts, and coriander leaves, basil, of which coriander is the typical leaf of pho. Pho is usually beef or chicken noodle soup and these of taste very successful for many years.

Pho soup water is often made by boiling water from beef bones, with a variety of spices such as cinnamon, star anise, and ginger. Roasted onions, cardamom, cloves, coriander seeds, and dry roasted cardamom. Beef (all types of beef, dull, dandruff is re-cooked or completely cooked) or chicken is used for pho (chicken boiled, tear meat for sweet sweetness).

Traditionally, "pho" is manufactured from rice flour, coated into thin sheets, then cut into threads. Pho is usually better when it's hot. A decent bowl of pho is heavily reliant on the processor's skill and knowledge, which is especially vital for the pot of broth. Mini pancakes are a popular pan-cake in Vietnam, particularly as a street snack in Nha Trang. Mini pancakes in the shape of "Moons" are created using rice flour. Making a foundation cake normally necessitates the use of a particular mold, which is usually made of earthenware and has several circular holes in which to lay the mold. Because clay stoves are large, multiple holes frequently surround the mount stove.

You may place onions or egg mixture inside with seafood, beef, pig, shell, shrimp, or squid, and served with raw leafy greens, but it is most commonly served with green mango, star fruit, and chopped cucumber.

When dipping entire cakes into the sauce, the accompanying sauce is commonly diluted fish sauce, garlic, chili, or braised fish sauce. To enhance taste and nutrition, the dipping sauce might include minced pork, onion, and chile.

Pancakes are a popular Vietnamese dish. This is an inexpensive and tasty cake that is well-liked by the general public. Pancakes may be found in provinces ranging from Nha Trang to the southernmost regions of Vietnam. It is now a well-known dish that has captivated the hearts of foreign tourists. Pureed rice flour, coconut milk, and turmeric powder are the essential components of pancakes.

People coated in flour dough thrown onto a hot skillet sprayed with frying oil (or grease), immediately spreading the dough so that the outside is thin and thick. Arrange thinly sliced cooked pork, shrimp, or silver cloves on top, and steam and sprout the mung beans. When the cake is crisp, fold it in half and serve it on a dish. Each plate is made up of three or four parts. A plate of fresh, crispy yellow pancakes accompanied by a dish of fresh veggies and a cup of vivid red chili sauce looks quite appealing.

The Nha Trang people's method of eating pancakes is plainly natural and liberal. Tear a piece of heated pancake and lay it on mustard leaves, then add raw veggies, roll tightly, and dip in fish sauce with a sour, spicy, salty, and sweet flavor; a few more carrots and radishes. The unique thing about pancakes is that the more people who eat them, the happier everyone is.

The key to boiling water for fish noodles - how to make the water both fresh and sweet - is a complex operation that requires the owner to be very careful. Many people tell each other that the noodles will be boiled with pineapple before adding spices to make the water used more fresh, that the sugar used to cook is rock sugar, not sand sugar, and that the water will settle and only take the clear water.

Each location has its own style of exhibiting diverse flavors, especially with the stages of the cooking water. However, while boiling water, people would boil the freshest fish, shredded fish, to extract the flesh for the last time. The skin and bones of the fish are cooked in pineapple juice with fish sauce, monosodium glutamate, chopped onions, and white peppers to settle the water. So that the soup does not become hazy and may be enjoyed fresh.

Every time people will make hot noodles on the spot, use broth, add a few chopped scallions, and slices of tomatoes and the final highlight is fried fish cakes. Grilled fish here is made with the best mackerel, then fried or boiled to last. The fish vermicelli soup will come with a small plate of chopped raw vegetables including lettuce, herbs, and bean sprout.

With lemon, chili, and a unique sauce created from fresh chile, raw garlic, granulated sugar, and monosodium glutamate, the spice is vital. A noodle bowl is a delightful blend of spicy, sweet, and sour lemon, meat, fish cake, and clear broth that customers consume and inhale.

Sour Minced Meat is mainly made of still hot thigh meat in large pigs using a pestle or blender to grind (or grind) finely then pound again, then mix garlic, pepper, and chopped pork skin.

When customers visit the restaurant, they are always served a platter of sour rolls and grilled rolls in addition to the baked spring rolls. Sour spring rolls with garlic and a dipping sauce of chile, garlic, sugar, and fish sauce. The combination of sweet and spicy fish sauce with spring rolls is highly appealing. Making baked rolls consists of pureed or grilled minced meat, and fried rice paper (fried rice paper rolls, put in the oil pan to inflate).

A grilled spring roll consists of about 6-8 pieces of minced meat, and the same amount of fried rice paper. Served with the main dish is raw vegetables. Grilled spring rolls are not complicated, but there are also 4 taste types spicy, sour, and acrid smell.

Depending on the season vegetables can be displayed including fish, chives, basil, holly, lettuce, cucumber, acrid banana, star fruit, mango, and sour onion.