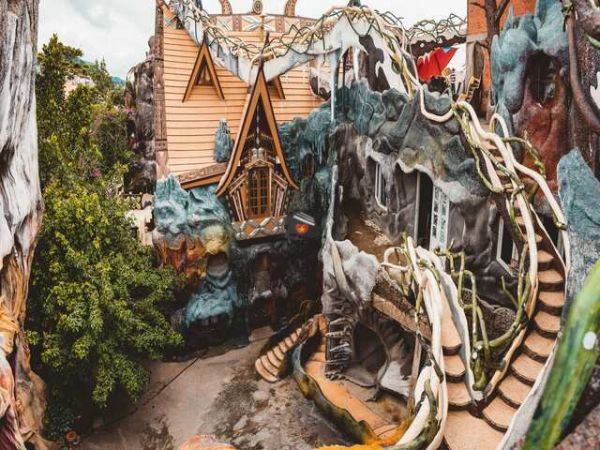 Crazy House is regarded as one of the world's strangest structures. When you go into Crazy House, you'll notice that the air is cold and fresh, as if you're in a forest. Visiting Crazy House is like traveling among gigantic tree trunks on narrow meandering trails. The tree branches link the tree trunks together. You have no idea where these branches will go. They can take you closer to the sky – to the top of Crazy House – or to the ocean – to a chamber with 3D marine creature paintings.

The building's general architecture resembles a large tree, with sculptured design components symbolizing natural forms like animals, mushrooms, spider webs, and caverns, and is described as a "fairy tale home" (Hang Nga, Vietnamese). Its architecture has been classified as expressionist, with intricate, organic, non-rectilinear features. The building's architecture was inspired by Catalan architect Antoni Gaudi, and tourists have drawn different connections between it and the works of artists such as Salvador Dali and Walt Disney. Since its construction in 1990, the building has been attracted for its distinctive architecture, being included in a number of guidebooks and being named one of the world's ten most "bizarre" structures by the Chinese People's Daily.

The first name is Hang Nga Villa and was renamed Crazy House after its original name was taken by someone else. Nature and the environment have been severely damaged in Vietnam, as well as in other parts of the world, since the turn of the century. Men have already paid too much for it. With the voice of architecture, I want to encourage men to return to nature, retain intimate contact with it, and respect it rather than exploit it and destroy it. 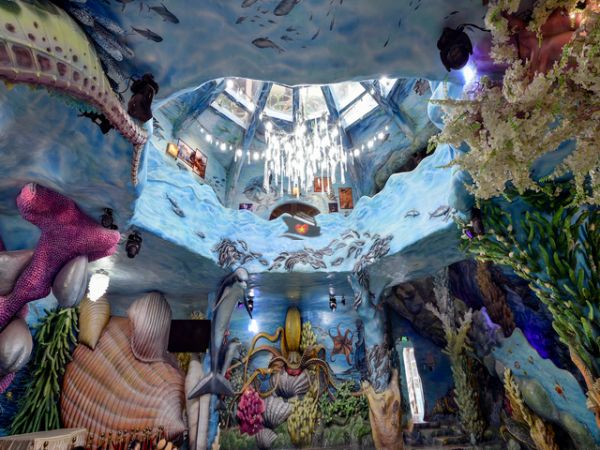 The Owner: Hang Nga Villa is also a reflection of her personal life and work manner, as well as an architect's creative flair. She returned to Hanoi after graduating from Moscow's architectural university (1959 - 1965) and completing her Ph.D. studies (1969 - 1972). She worked at the Architecture Design Institutes of the Building Ministry and the Cultural Ministry. She was assigned to the Building Design Institute in Dalat in 1983.

Dalat appeals to her because of its magnificent environment, temperate atmosphere, tenderness and good character of the locals, and tranquility. After designing various projects for the government and for her personal enjoyment, her enthusiasm for architectural creation has prompted her to start putting her visions into action. 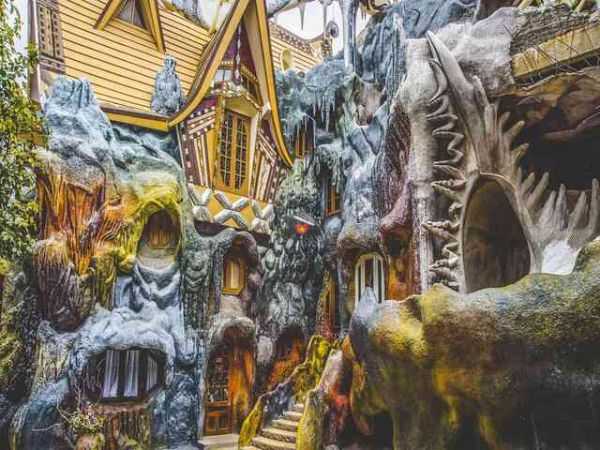 Crazy House is also a motel with some guest rooms for people seeking a more natural environment. We have a total of 10 guest rooms that are shaped like tree trunks and are positioned inside the structure. Each room is named after an animal that represents a country: the Bamboo room represents Vietnam, the Bear room represents Russia, and so on. To present the concept of "Back to Nature," the rooms are furnished with natural furnishings and fundamental amenities; thus, contemporary amenities like television and air conditioning are not available. Living in the hollows of tree trunks will make you feel safe and secure as if Mother Nature is protecting you.