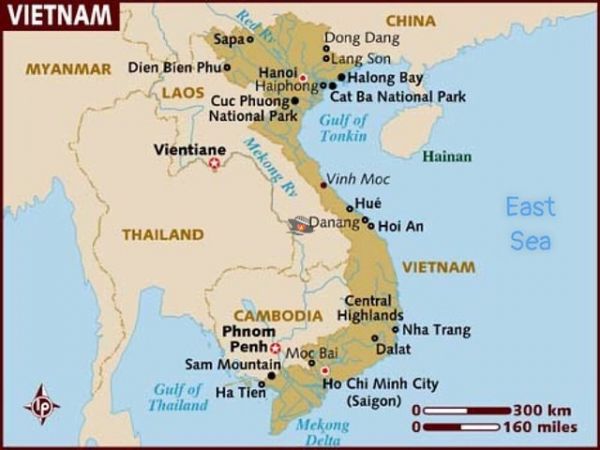 Located in Southeast Asia's Indochina peninsula, Vietnam is bordered to its east by Pacific, to its southwest by Cambodia, to its northwest by Laos, and it is north by China.

Over 90 million people live in 63 Provinces, making it the world's 14th most populous nation.

Nature abounds in Vietnam, as seen by its many stunning landscapes. Mountains, paddy fields, limestone caves, and lagoons are just some of the sights that greet visitors to the country.

Vietnam is also home to several historical landmarks, including military museums, artifacts, jails, and subterranean tunnels, as a result of its volatile past with French and American troops.

You may use our detailed map of Vietnam to help you find your way about during your trip. About Map Of Vietnam:

South-east Asian nation Viet Nam is located on Indochina Peninsula, at the easternmost point of its length. As an S-shaped country, it has an extensive coastline along the South Pacific Sea, a border with China in the north, a border with Laos in the south, and borders Cambodia in the southwest. Indonesia, Malaysia, the Philippines, and Thailand share marine boundaries with Vietnam. On the surface, it is around the size of Finland or slightly larger than New Mexico in the United States.

Hanoi, Ho Chi Minh City, Can Tho, Da Nang, and Hai Phong are among the 63 provinces in Vietnam, and there are five centrally-controlled municipalities at the same level as provinces.