The Phu Kieng Wooden Bridge is one of two unique bridges in the coastal city of Nha Trang. Not only famous for the beautiful scenery here but also very humane and practical meaning. It assists locals in the condition of living conditions, pupils studying as well as local people trading at the market.

The wooden bridge was erected in 1990 to assists locals with easy access to the city center. The wooden bridge was constructed using wooden pillars that were anchored at the Cai river. Sturdy planks border the bridge surface, allowing vehicles such as motorcycles, bicycles, and pedestrian traffic to move. It has a length of  380 meters and is 2.5 meters wide.

The wooded bridge was built by Mr. Nguyen Xuan Thuan, who is also its owner. After taking advice from the local government limited funds to build the bridge. Mr. Thuan agreed to spend his own money to build the bridge and collect fees from those who used it so he could reinvest the money. There will be a defined yearly price schedule for each of these rounds. A pedestrian costs 1000 VND per way, a bicycle costs 2000 VND per way, and a motorcycle costs 3000 VND per way.

However, the disadvantage that occurs every year is that the restoration costs a lot because of natural disasters and floods. Every October, heavy rains cause floods, causing the bridge to be severely damaged. In 2019, the whole bridge was washed into the sea. At that time, locals have no choice and take a detour to reach the city center.

Accordingly, the newly built bridge is about 400m long, 75m downstream from the existing railway bridge. This is a bridge project combined with a salinity prevention dam, with a total investment of 760 billion VND in the Target Program to respond to climate change and green growth in the 2021-2024 period of the Government. Besides that, the salinity prevention dam is expected will be complete by the end of 2023. 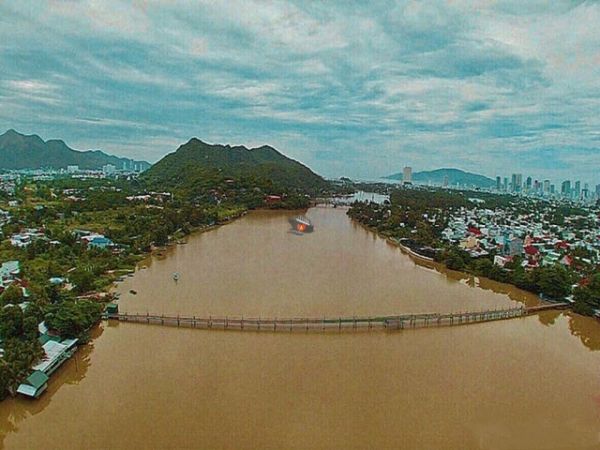